Think of today’s post as my first “commission.”  Our friend’s Kyle and Elizabeth were over for Eddie’s 1st birthday.  Elizabeth saw the clown fish cookies I had made to go with a fish-esque motif I tried to pull off (not so much) and thought the were just adorable.  She knew they were having a Sesame Street party for their daughter’s birthday and Elizabeth asked me to make Elmo cookies.

Wait.  You think I’m awesome (more than you usually do) and want me to do something special for your sweet little baby.  Where do I sign??!!!!  I was so excited to make these cookies and to help out with the party.  Kyle and Elizabeth are seriously the nicest, cutest couple.  Kyle and Mike have been friends since they were 14.  It’s a total bro-mance.  But now…COOKIES! 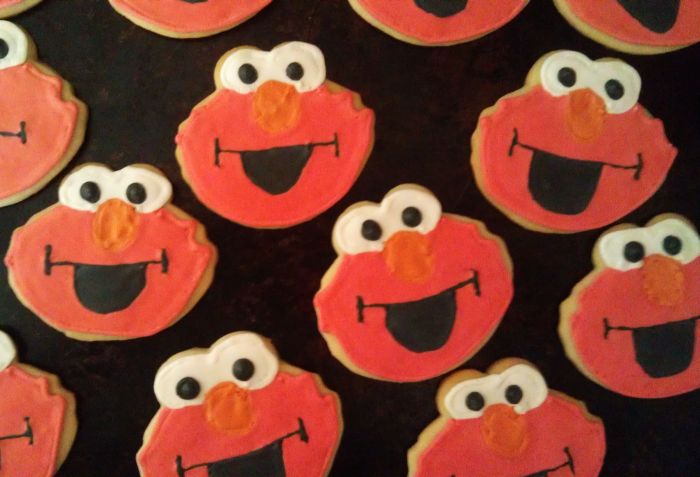 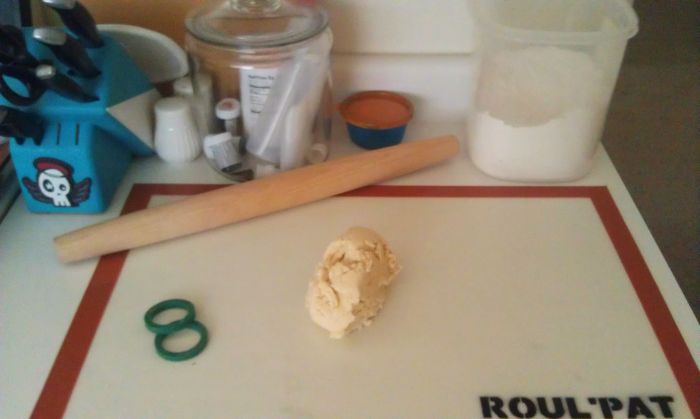 {Check out my awesome Roul’Pat from Dorothy‘s giveaway. I LOVE this thing!
Having an area I get all floured when I’m kneading dough and then just pick it up to wash the amt in the sink rocks.  Plus, now I can lift the mat up and peel off the cookies without worrying about the dough breaking or smushing them with a spatula.}
Roll out dough and using your Elmo cookie cutter and bake cookies.  Allow to cool completely.
Portion out royal icing into 4 bowls – you’ll need the most for red, then black, white, and finally orange.  Mix food coloring into corresponding bowls until icing is colored as desired.  Cover unused icing with plastic wrap – make sure the wrap touches the surface of the icing to prevent drying.
Using a #3 tip, pipe an orange oval just under where the eyes will be, for the nose.
Using a #3 tip, pipe a black line under the oval. Then pipe a half circle-ish under the line, and add two smaller lines for the ends of the mouth 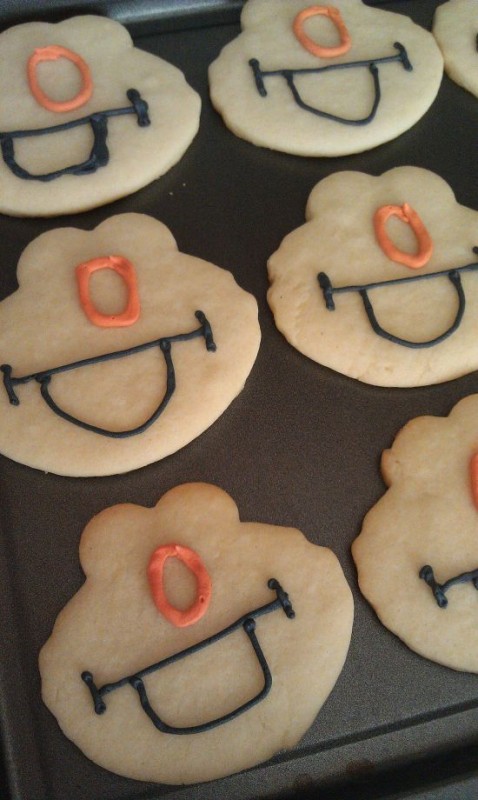 {If I hadn’t been on a time crunch, I would have flooded the white and red sections first and then piped the nose and mouth on top of the red icing once it had set.} 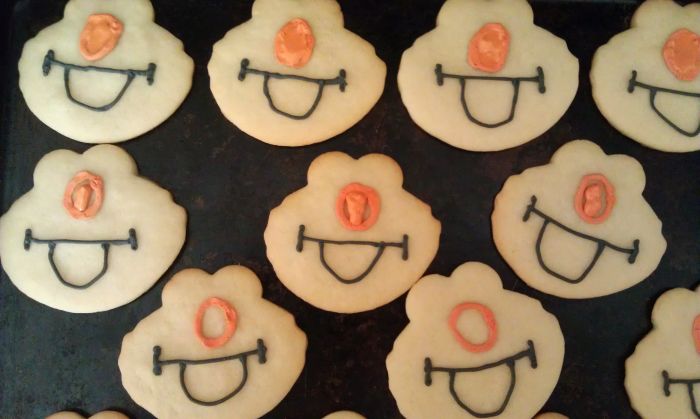 Reserve some of the black icing to finish the eyes later.  Allow outlines to set for 15 to 20 minutes.  Using one tablespoon of water at a time, thin out the orange and black icing.  Flood the nose and mouth of each cookie. 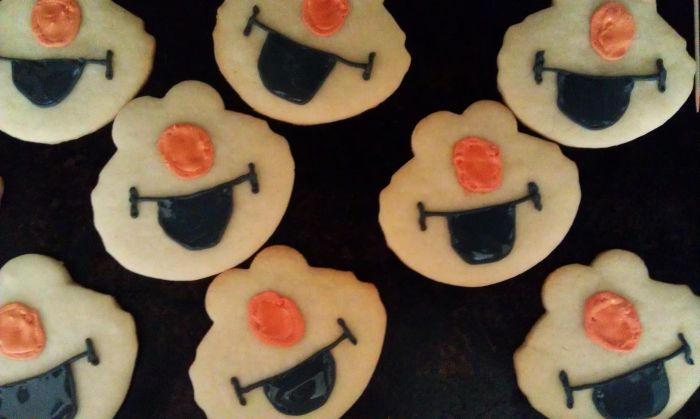 Let flood icing set for at least 7 hours.
Using the #3 tip and white icing, pipe Elmo’s eyes.  Then using the red icing and a #3 tip, outline Elmo’s face.  Be sure to add the fur peaks on each side.  Allow outlines to dry 15 to 20 minutes. 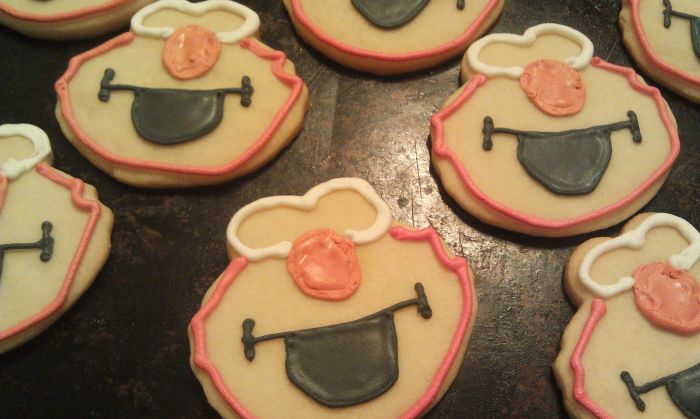 Thin white and red icings with water, one tablespoon at a time, until flood consistency.  Flood eyes and then face of Elmo.  Be careful not to let the red flood icing cover up Elmo’s mouth. 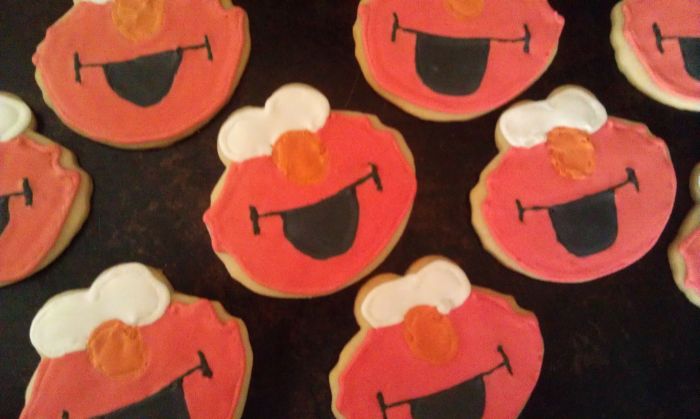 Allow cookies to set/dry overnight.  Refrigerate reserved black piping icing in the refrigerator.
In the morning, pipe Elmo’s pupils toward the lower middle of each eye and you are done!

Pack up the cookies and take then to the party! 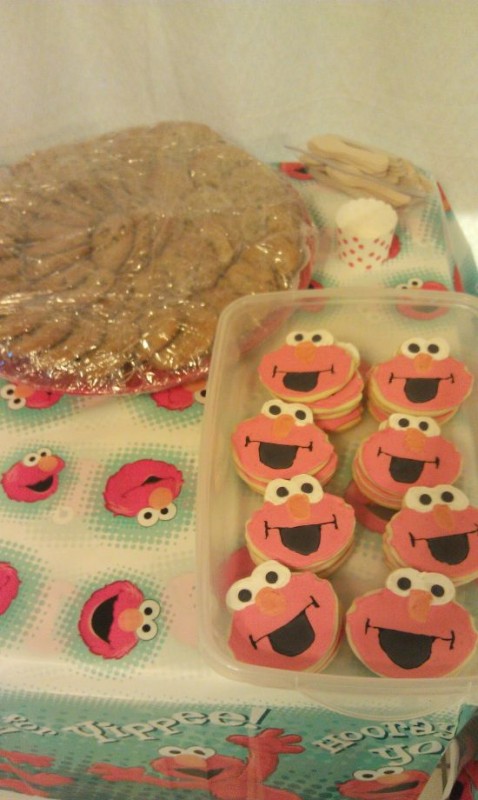 I think my cookies came out pretty darn good.
I got a lot of compliments.  🙂  Yay ego boost!! 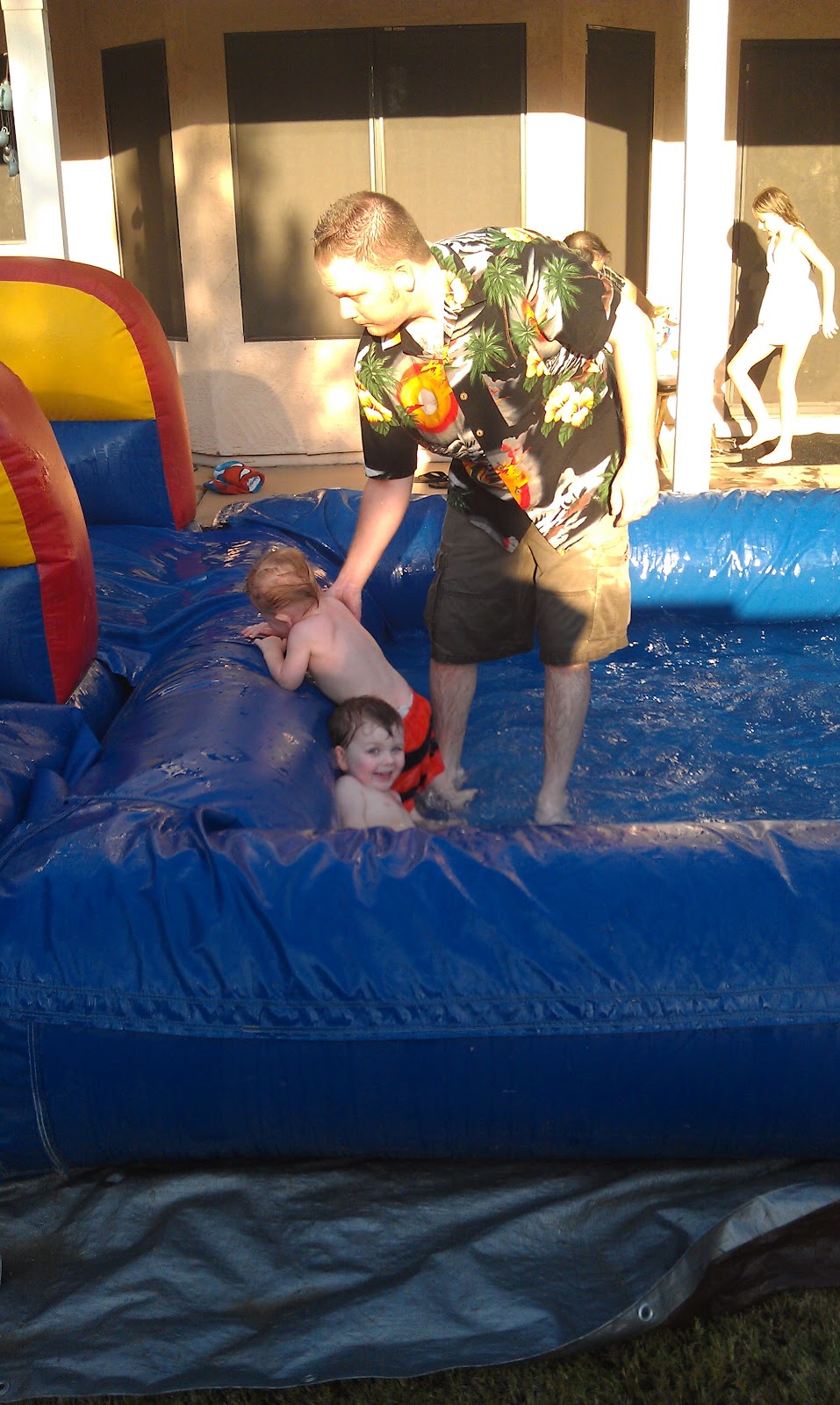 There was an awesome water slide in the backyard.  There were 4 of us parents taking turns regulating the kids.  The little ones were playing in the pool of water at the bottom of the slide and the parents were acting as a human barrier between the splash down side and the “kiddie pool” side.  We all ending up soaking wet, but the kids were happy.  Later on some of the dad’s started going down the slide with the kids.  It was a blast!
« Chicken Imperial
Caramel-Apple Pie Triangle Treats »