Last week the littles and I had the amazing opportunity to visit the Arizona Science Center and get a sneak peek of the new Lost Egypt exhibit.  I can’t being to tell you how excited the boys were, or how fun the day was…but I took a bunch of pictures.  So we’ll start there. 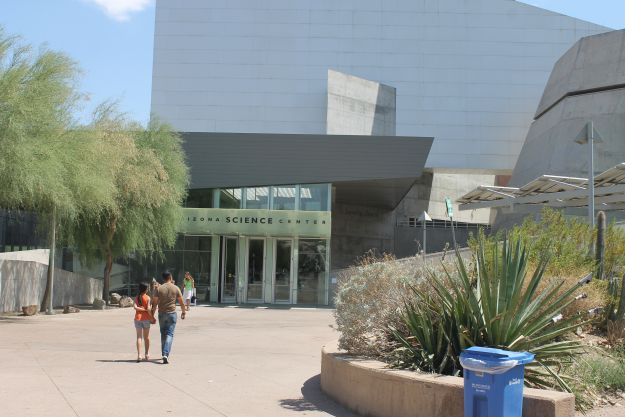 I remember going to the Arizona Science Center as a kid on field trips.  It was always amazing.  All the exhibits were incredibly interactive, and there was to much to learn.  It was basically a touch everything zone.  Kid heaven.  I hadn’t been in 20+ years when we took this trip, but I’m so glad we did.  It was everything I remembered and more!  I had just as much fun as the boys.  Not I think anything can top Eddie’s face here. 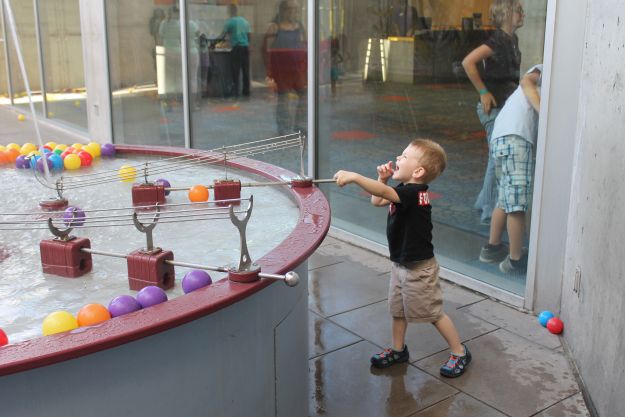 Okay, so the Lost Egypt exhibit is really cool.  There’s a real mummy (yeah, that’s all the boys talked about the 2 days before and for days after), and lots of great activities for the kids to learn about ancient Egypt and how archaeologists work. 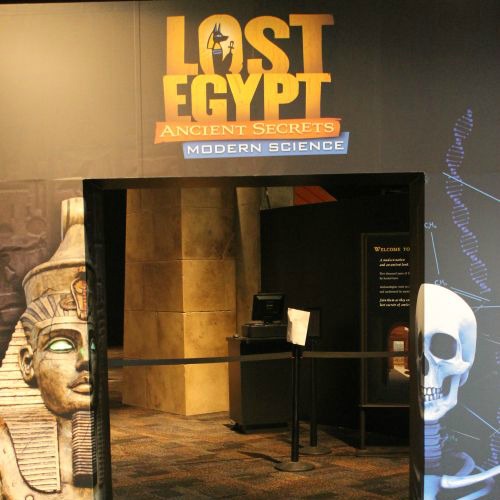 One of the coolest things the museum staff did for our group, was walking the kids through how mummies are embalmed.  It was with human body dummy, but all the kids thought the process was really cool.  Having a visual, interactive demonstration really showed them how and why the Egyptians treated their dead the way they do.  {This is not part of the normal exhibit, we just got a little treat.} 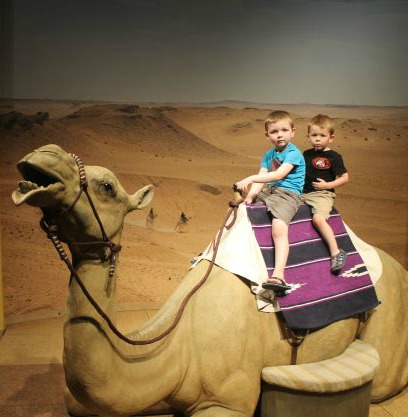 Oh! Did I mention there’s a camel?!?!?!?!!  The boys thought it was really cool.  Eddie loved playing with all the archaeological equipment, and seeing how the scientists would find areas to excavate. 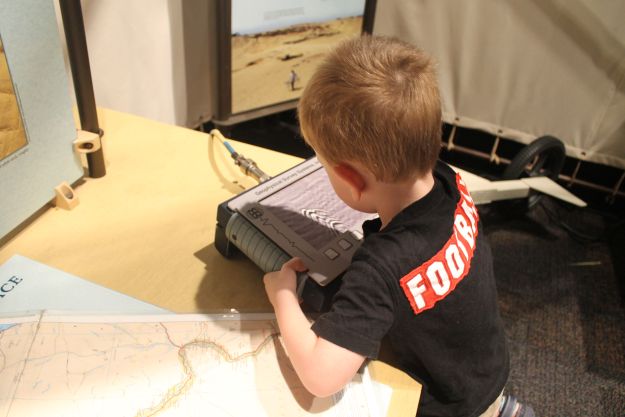 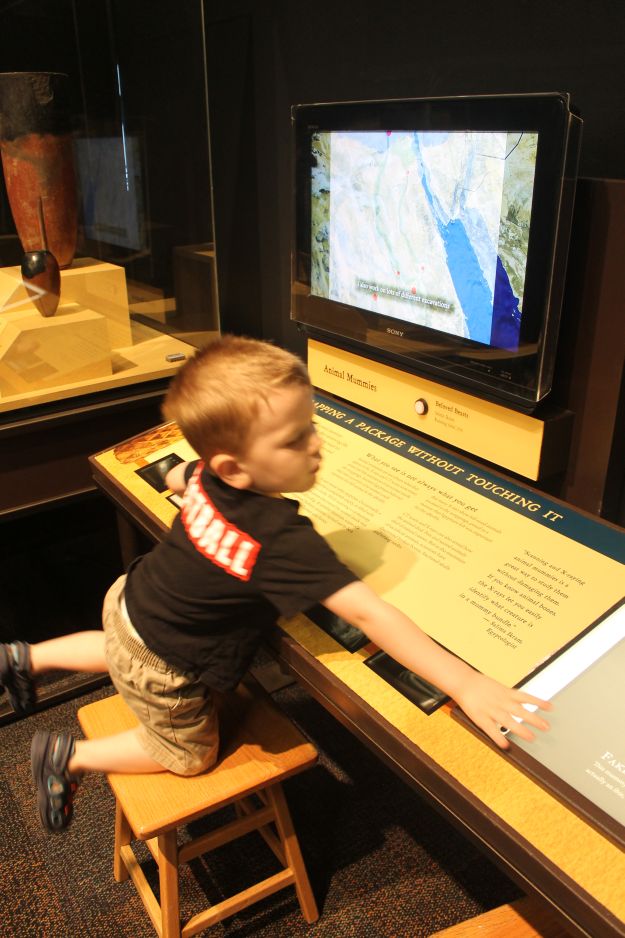 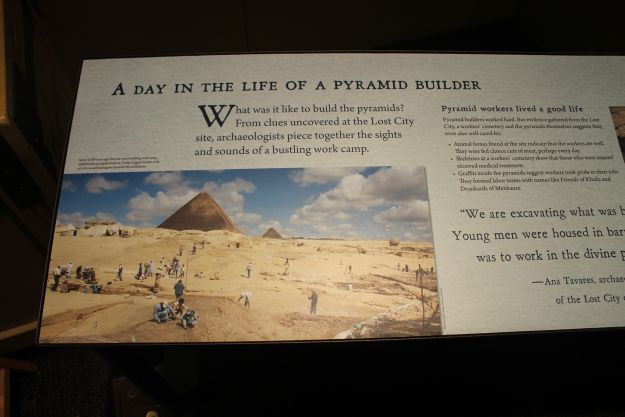 The boys spent lots of time playing tug of war with pyramid blocks (like really heavy ones) learning which method was easiest to transport them.  And once you build a pyramid, you should create a sand storm to cover it up.  Obviously.  🙂 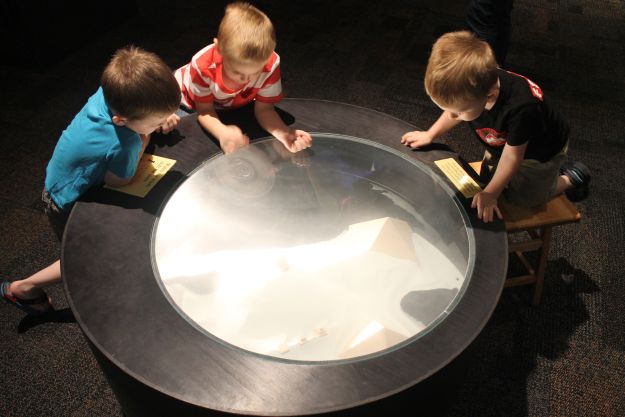 All the kids sat through the entire movie about mummification, and Egyptian religious beliefs about the after life.  Where you soul goes, how you are judged to go to paradise, and what Egyptians were entombed with.  Those black panels on the side and hieroglyphics light up to help tell the story! 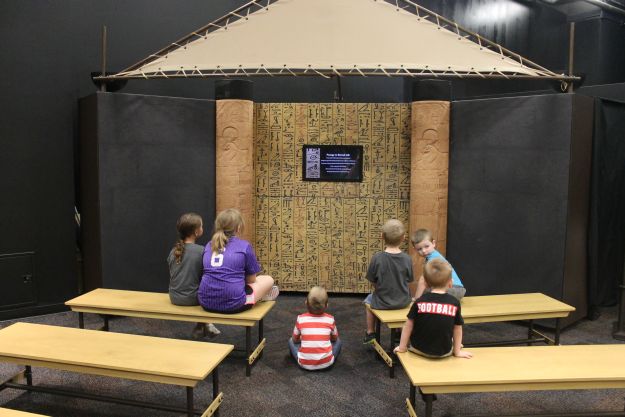 All the exhibit displays were really interesting, and covered everything in the movie.  While I couldn’t take a picture of Annie (the mummy), I have to tell you Otto kept me going back to see her every chance he got.  It’s a REAL MUMMY people! 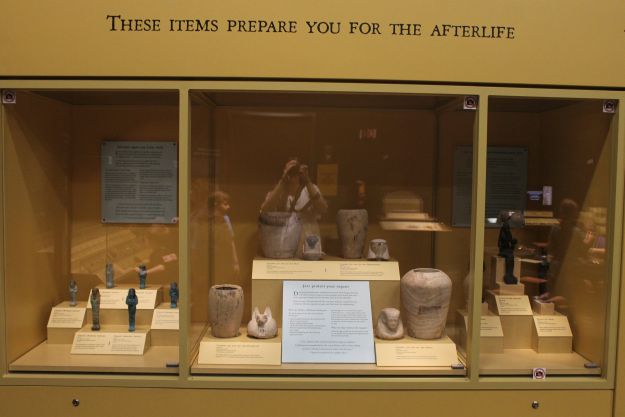 And the exhibit showed us how scientists see inside the wrappings and learn about mummies without conprimising the integrity of the mummy. 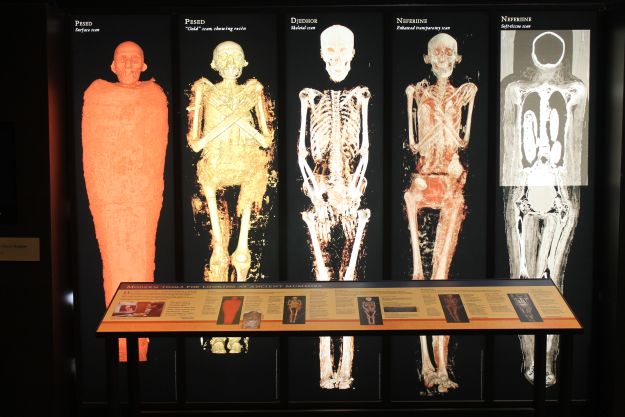 The nerd in me thought the coolest thing there (besides the mummy of course), were these pieces.  It’s a replica of the mummy’s skeleton and wrappings under the ceremonial head and body pieces.  And they’re made with a 3-D printer!  I’ve seen so many coolt hings made with 3-D printers, but this takes the cake.  All this from scans and computer reproductions the scientists put together. 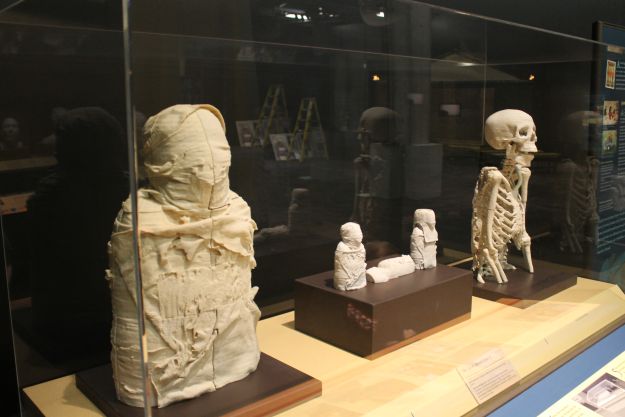 But it’s can’t be all 3-D printing and urns.  There’s a pyramid for the kids to build, and pottery pieces that need to be reassembled after tomb raiders broke them. 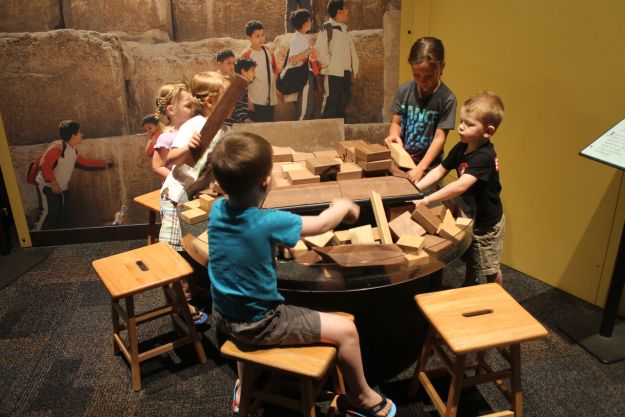 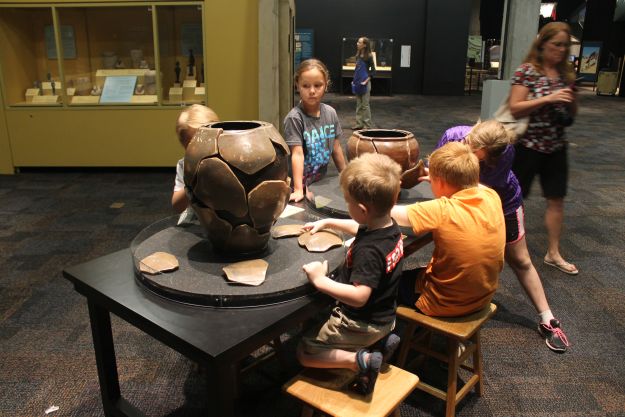 There are xrays of mummified pets and animals buried along with mummies for the afterlife. 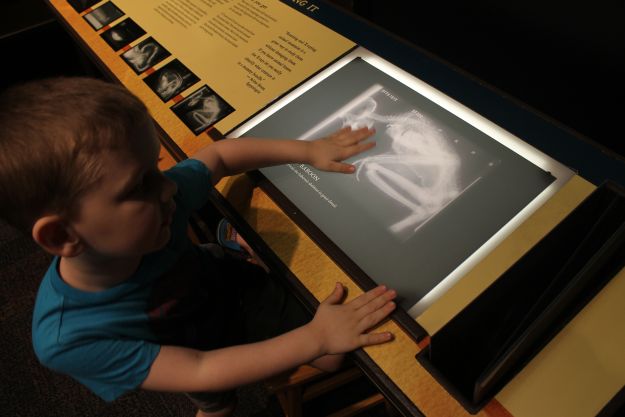 There’s also a collection of the most amazing Egyptian art.  This picture is just one of many incredibly detailed and beautiful murals hanging in the exhibit. 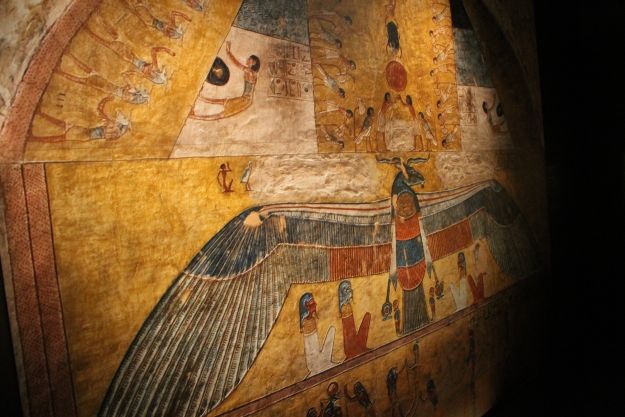 The kids can also put together hieroglyphic sentences to see how Egyptians read, and an area that will pronounce the hieroglyphics and teach your kiddos ancient Egyptian. 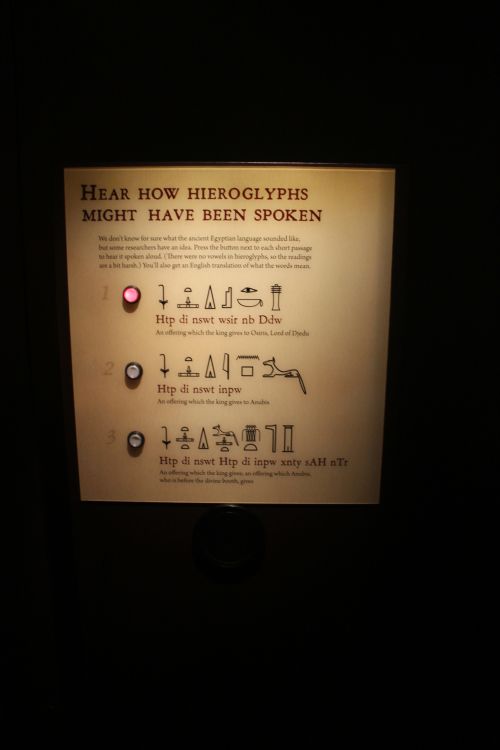 Eddie couldn’t get enough of the camel. 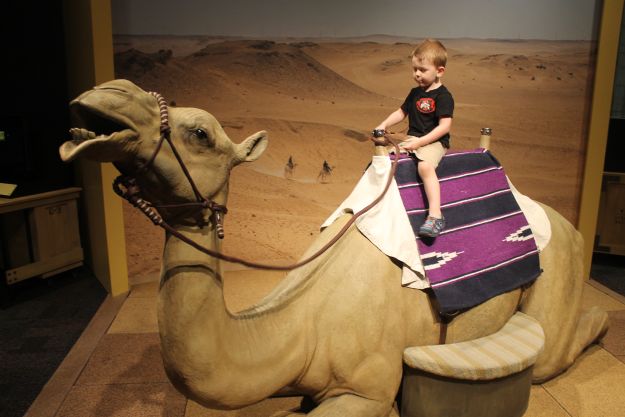 The Lost Egypt exhibit is on the 3rd floor of the Arizona Science Center.  Admission is $26.95 for adults, $23.95 for seniors, and $19.95 for children – which also includes general admission to the rest of the museum.  I’m talking 3 floors of the most fun science has ever been.  Think real life Bill Nye.  The weather stage alone is worth it! 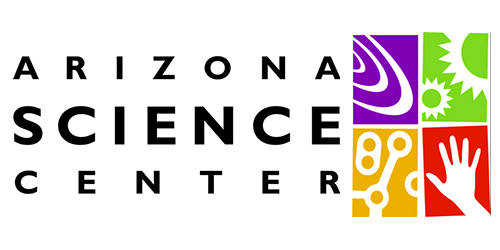 We had the most amazing day, and you can too!  The Arizona Science Center is graciously giving away 3 family passes.  Each set of family passes includes 4 ASC general admissions + passes to the Lost Egypt exhibit.  To enter, fill out the rafflecopter widget below.  We’ll see you in Egypt!
a Rafflecopter giveaway

I was provided the opportunity to visit the Arizona Science Center and Lost Egypt exhibit through a campaign with Blended Extended. All opinions are my own.